54.3% of the elderly do not intend to invest the savings they hold in cash

44% mention non-self-sufficiency among their fears

62.3% have relatives living nearby 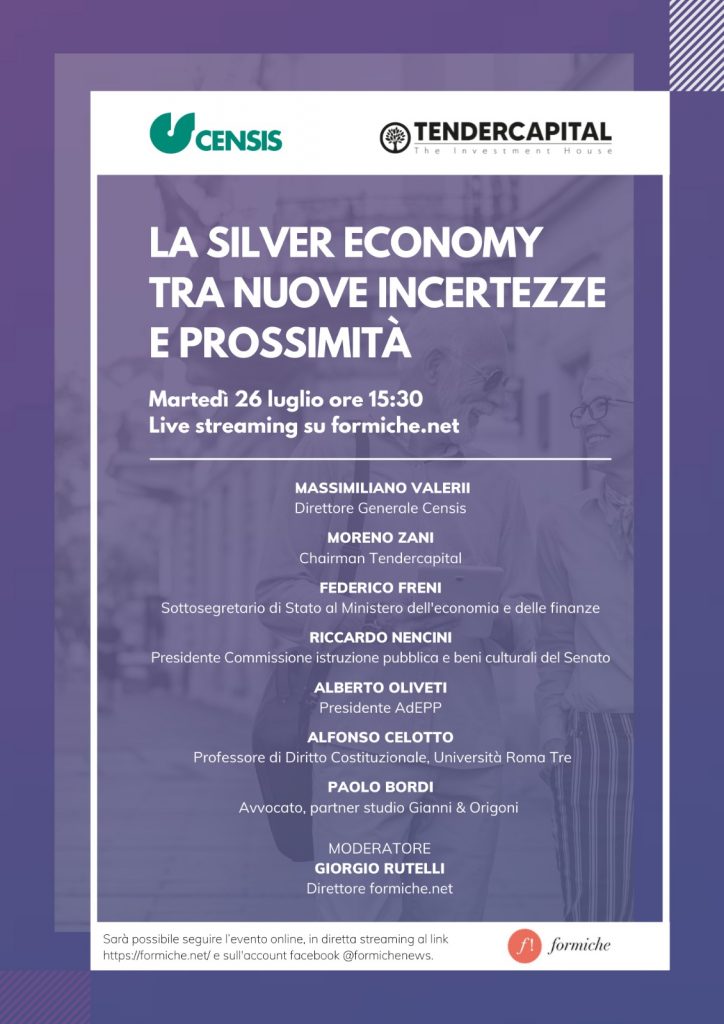 Rome, 26 July 2022 – The Censis-Tendercapital 2022 Silver Economy Observatory, “The Silver Economy between new uncertainties and proximity” was presented with the aim of offering a picture of the conditions of the elderly in a rapidly evolving socio-economic context, which goes beyond the pandemic trauma. A scenario characterised by the uncertainties that events such as the war in Ukraine or rising inflation are generating in everyday lives.

The subjective value of cash

The study reveals the importance for the elderly of cash, which makes them feel able to cope with some of the effects of their vulnerabilities. In particular, the subjective, psychological value of cash outweighs the economic costs amplified by inflation. In fact, 54.3 per cent of the elderly have no intention of using the savings they hold in cash for investments, while 13.6 per cent have no definite idea and 32.1 per cent are ready to put the cash into some investment.

Elderly people between fears and welfare

Among the elderly aged 75 years and over, almost half (47.8%) suffer from multi-chronicity, with significant consequences on daily life, a quota that rises to over 55% in the South-Islands, and is higher among women (52.4%) than men (40.9%). At the top of the list of perceived fears of the elderly is non-self-sufficiency, indicated by 44% of the elderly.

Even though the pandemic period has strengthened the link between citizens and welfare, more than 69.1 per cent of the elderly declare that during the year they tried to book appointments with specialists or to undergo examinations through the National Health Service but found very long waiting lists.

Today, 62.3 per cent of the elderly have a home with children or siblings living nearby, 79.6 per cent have their general practitioner close by, 92.7 per cent have a reference pharmacy, and 31.4 per cent have an emergency room or hospital. Moreover, in the digital age, physicality remains an important requirement in the everyday life of the elderly, for example in their relationship with services, including those of the Public Administration: 59.2% physically go to the counter of the institution.

In ten years, the number of people aged 65 and over has increased by more than 1.5 million. The performance of those over the age of eighty, which increased by 22.7 per cent to the current 4.5 million or 7.6 per cent of the population, is exceptional. Grey wave rising, while the total population shrinks by more than 1.1 million.

Massimiliano Valerii, Director General of Censis: ‘Uncertainty is the greatest evil for the elderly at this stage. But they manage to keep it under control, on the one hand with the ready cash for all eventualities that they still accumulate despite inflation, and on the other by valuing proximity, with children and grandchildren, doctor’s office, pharmacy, supermarket, bar and restaurants of reference not far from their home, usually reachable with a walk of twenty minutes at most. This is the pragmatic, and so far effective, response of the elderly to the fear of new emergencies’.

Moreno Zani, President of Tendercapital: “Inflation is a real threat to Italian domestic consumption and exports, and the Observatory’s data show how much the silver segment perceives its seriousness. We need to work at a national and European level to restore stability and a climate of confidence so that the fears expressed by the silver segment do not affect the use of Italians’ savings and, consequently, the country’s collective well-being and growth”.